The Piano Soundboard Is a Board that Also Stops Vibrations 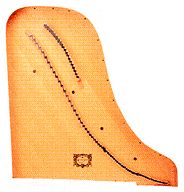 Piano strings are made of steel. In contrast, the soundboard that translates their energy into a rich, resonant sound is made of wood. If it were only a matter of loudly amplifying the sound produced when the hammers strike the strings, a metal plate would have been much more efficient. So why is the soundboard made from wood? The answer is that, unlike metal, which amplifies both low and high frequency sounds in the same way, wood amplifies only the lower-frequency sounds. For the higher frequencies, it does the opposite: it cuts them off.

If you listen closely and focus only on the sound the struck strings make, you would find that it is full of metallic jangling noises. If this sound were to be amplified as is, the piano would end up being a giant noise generator. The reason why this does not occur is because wood, the material from which the soundboard is made, cuts off the higher harmonic components (overtones), leaving only those components of the sound that are musical, that sound good to our ears, transforming them into a richer, more resonant tone.

In other words, the soundboard is a "board that transmits vibrations," while at the same time, it is in a certain sense, a "board that stops vibrations." What makes the spruce family, and especially Alaskan (Sitka) spruce, so highly valued as soundboard materials is that these species have the property of absorbing the higher overtones more effectively. They transmit only the sounds that we perceive as round and mellow in a rich fashion.